This comic is about finding your voice, loosing it and finding it again. 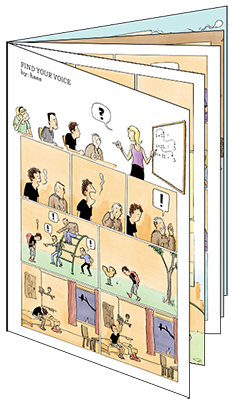 [click on the image or here to read ‘Find Your Voice’]

This comic was 100% inspired by an image that settled in my head one day.
The image of someone walking around with a word balloon under his arm. 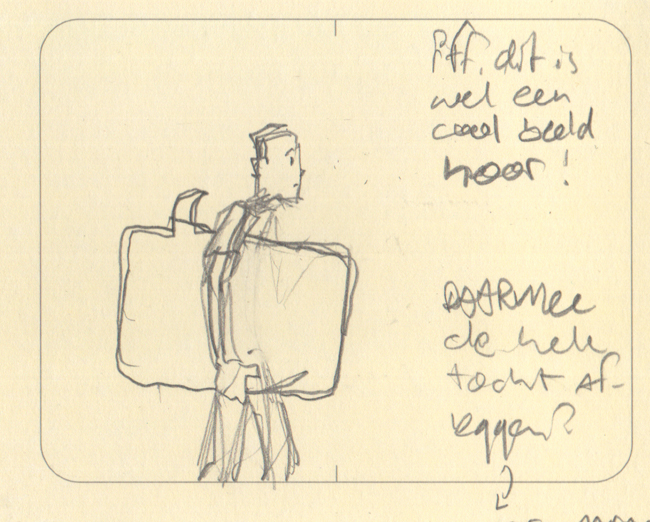 I’ve said it before, and I’ll say it again, word balloons are – as far as I am concerned one of the craziest things about comics. They developed from a kind of necessary evil into an integral part of comics.
If you want to know more about word balloons read my article, History of the word balloon here.

This – wordless – comic shows a young boy having trouble answering a (simple?) question his teacher asks. After school, alone in his room, her practices an ‘absolute answer to all questions’
It could be seen as a metaphor for the way we develop an attitude towards life in our younger years. As a response to all the questions life seems to throw at us.
More often than not it’s quite a black-and-white attitude.
And most likely a bit blunt.
Hence the exclamation point.
And it suffices, most of the time.
Until someone poses a counter-question.
Like our main character experiences. 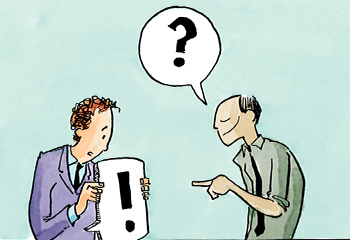 Such counter-question can have a big influence on our belief system and convictions about life. You used to have an answer for anything, but now they just don’t seem to fit anymore.
Just you and your wordballoon.

Some people complain that a lot of my comics lack optimism (which is true I guess) so for this one, I decided to give it a happy ending.
Because sometimes it is possible to develop a more nuanced attitude (I’ve seen it happen).
Often triggered by meeting someone that turns your views upside down.
In this case our main character meets a little girl that frees him of the knot in his throat.

This was actually one of my first comicsperiments I ever did.
The lack of words really forced me to focus on pose and body language.
For publication on my comicsperimenter site I revisited it and added some color. 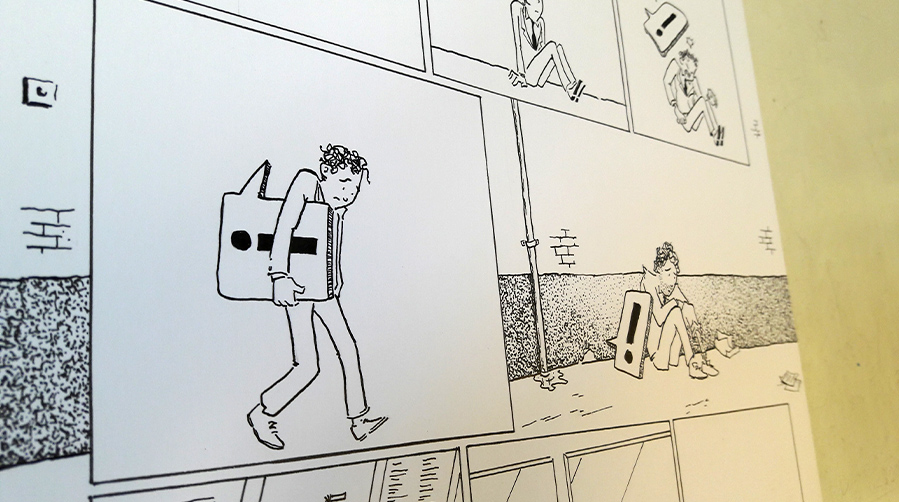 It is always such a weir experience to revisit your old artwork.
Like stepping into a time machine and talking to your younger self.

This is actually my third word-balloon-centric entry in the comic section.
If you want to check out more, you can read:
• Bubbles: about the way speech bubbles talk to each other.
• Argument: about the cruelty of compliments.

No doubt there’s more word-balloon-comicsperimenting to be done, but for now I think I’ll focus on something a bit less cohesive.
Like subject-to-subject transitions.
Stay tuned!

WHAT DID YOU THINK?

Did you enjoy the lack of text in this comicsperiment?
Or do you read textless comics all the time?
What did you think of Finding Your Voice?
Please let me know in the comment section below!