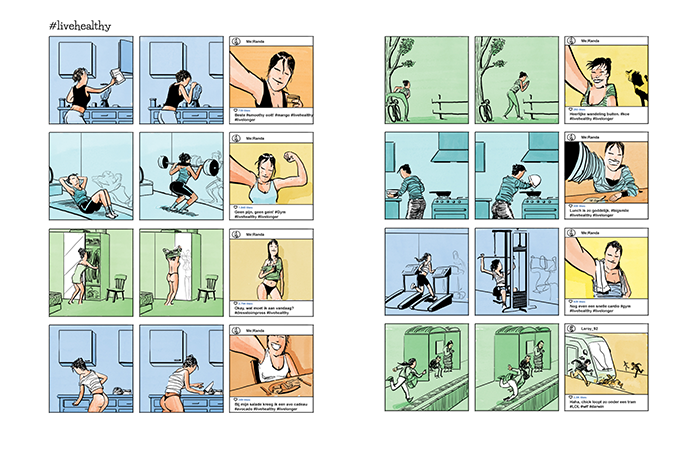 [click here, or on the image above to start reading]

Social media like Facebook, Twitter and Instagram have become a part of our daily lives.
It’s hard to imagine, but there was a time that I had to use a land line to call a friend when I missed a school day (I was sick, I swear) and ask if there had been any new assignments.
Talk about your social networks.

As a comic book artist I like using Facebook and Instagram, actually.
They are a great way to reach an audience I normally wouldn’t. And in return they feed me with inspiring images and posts I would normally never get to see.

However, since I’ve been using these social media, I’ve been confronted with the more negative side of it as well.
People pretending to be awesome.
Companies desperately trying to connect to their audience. 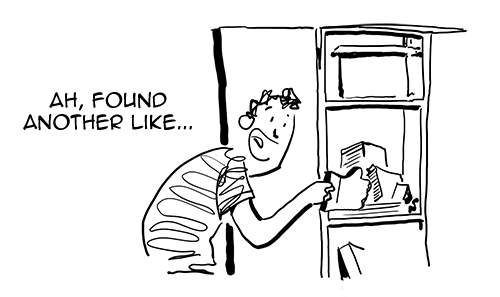 Nearly every other week I have to fight the urge to shut down all my social accounts and go live in a cave somewhere.
And I know a couple of friends who did just that (well, not the cave bit) and felt a great form of relief.
Like they had more time, more space in their lives for the stuff that matters.

And there’s no arguing an app like Instagram is completely addicting.
I just have to keep checking my phone to see what’s ‘going on in the world’.

Fortunately a more critical view on the consequences of social media is vocalized by different outlets as well.
The amazing series Black Mirror constantly explores the dire consequences of our technical progress. For instance, an episode called ‘Nosedive’ shows a gleam peak into a world where literally everything depends on the number of likes you receive.

Last year the story of Essena O’Neill broke. She altered the description of het Instagram photo’s to reveal what she really felt when the pictures were taken. Leading to descriptions such as ‘this might look like a spontaneous photo, but in reality I took over a hundred, before I was satisfied about the way my belly looked”. Whether or not her story turns out to be a hoax, the message is an alarming one either way.

And of course, no story about the crushing effects on social media would be complete without mentioning the creat video Steve Cutts made for Moby’s ‘Are you lost in the world like me’.
It’s not exactly subtle, but maybe that’s a good thing.

All of these ponderings laid the groundwork for this short comics, #Livestrong.
In it I mainly wanted to show you can easily lose yourself in something that seems very important, but ends up being very… trivial.
The girl in the comic, Miranda (Me:Randa) captures everything that happens in her life.

Her motto is: #livehealthy #livelonger.
She works out, eats healthy and turns every moment into a selfie.
When she trips she gets run over by a trolly.

The experiment in this comic were mainly the selfie-portraits, such a weird pose with the face looking straight into the camera. Not to mention the arm that is extended right into the camera.
To show how much ‘real life’ differs from what we show on social media, I drew her from the back in nearly all other panels.
The story is told without any word balloons, the only written text is that of the Instagram description. Forcing the reader to create part of the story in his/her head.

This comic might seem like quite the indictment.
Against Instagram, or social media in general.
I don’t know, maybe it is.
It’s just very easy to get carried away by the rules of the platform (with the only goal to keep you engaged on that platform).
As soon as you deem the number of likes more important than actual conversations with actual people, I think you outsource your happiness to the people distributing the likes.
Which is something we do practically without any thought.
And the quick tap of a thumb.
Even when we see someone get run over.

Would it be deceptive to end this rant with mentioning my own Instagram account?
I guess so, right?
Good.

You can now follow, or unfollow me on Instagram here!
I would love to see you there, so we can talk about social media a bit more.