The other day, Variety shared some insights about the infamous Justice League reshoots.
Aside from all of it looking like a mess, the thing that stood out to me was the story that Henry Cavill is doing the reshoots with a MUSTACHE!
Apparently they are going to – get this – remove the mustache digitally in post-production.

I published this as a slide comic on my Instagram account first and rearranged the images into a single page here. 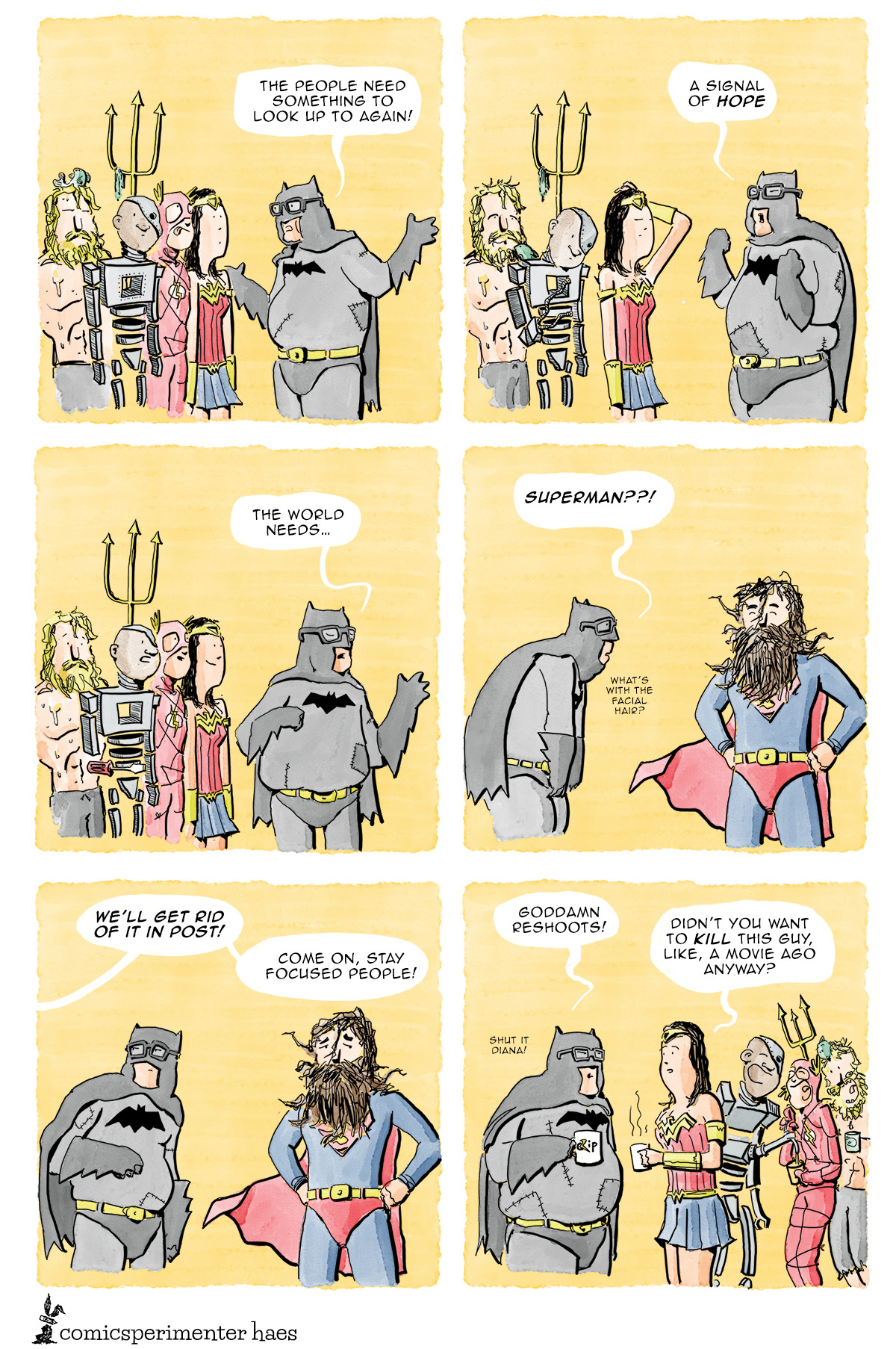 [click on the image or here for a larger version]

Now I find this both hilarious and exemplary of the weirdness the production process of this movie has taken on.
The Justice League reshoots have become quite controversial, with one half of fans sayng it’s just regular pick ups, and the other half claiming it’s a sign of the movie being an abomination.

If you want to read more about it, I can highly recommend some of the articles over at a site called Batman On Film, my source for batman news since, oh I don’t know, 1999.

One can only hope there will one day be a thorough reconstruction of everything that went on behind the scenes for all these movies. I’d make a comic out of it without a second thought.  Anyway, I had to make a comic about it.

Since this had to stay a comicsperiment obviously, I decided to mess around with something I like to call ‘background micro stories’.
Since the comic book reader’s eye can wander on the page, there is room for multi layered story telling. As far as I am concerned this is one of the things that sets comic apart from any other art form. The artist has the space to draw a second story in the background that would not distract from the main story, but in a second reading would provide some depth or maybe relevance to the whole thing.
In this case I just had some fun with it and gave each character a little ‘arc’.

… finds a fish in his hair: 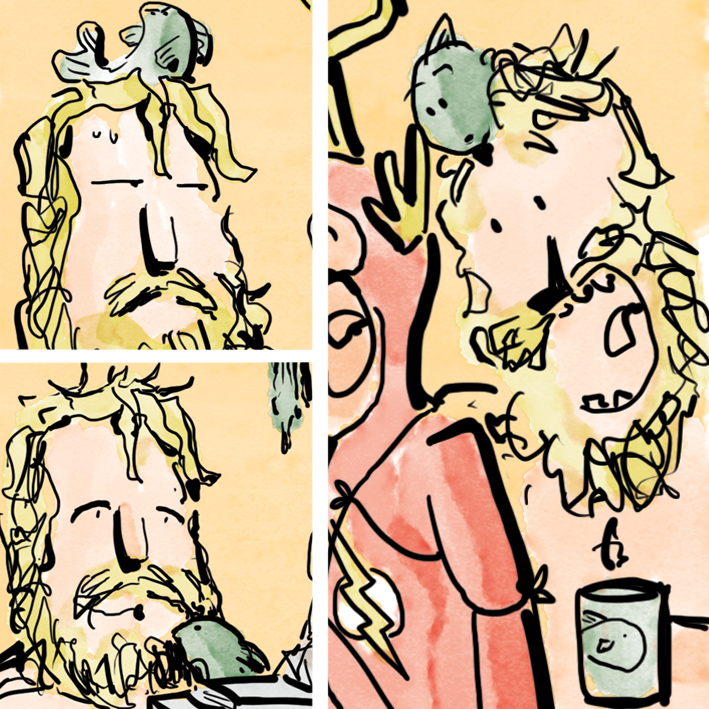 …has a new tool on his arm each panel (ending with a beer faucet): 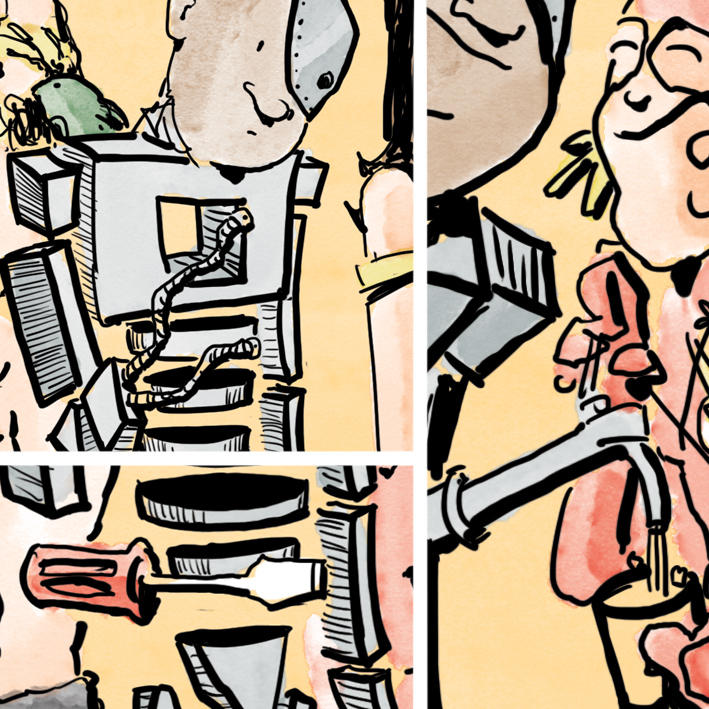 …runs of in the second panel and his silly movie costume – with all those threads – ends up tying his legs together (try outrunning that!): 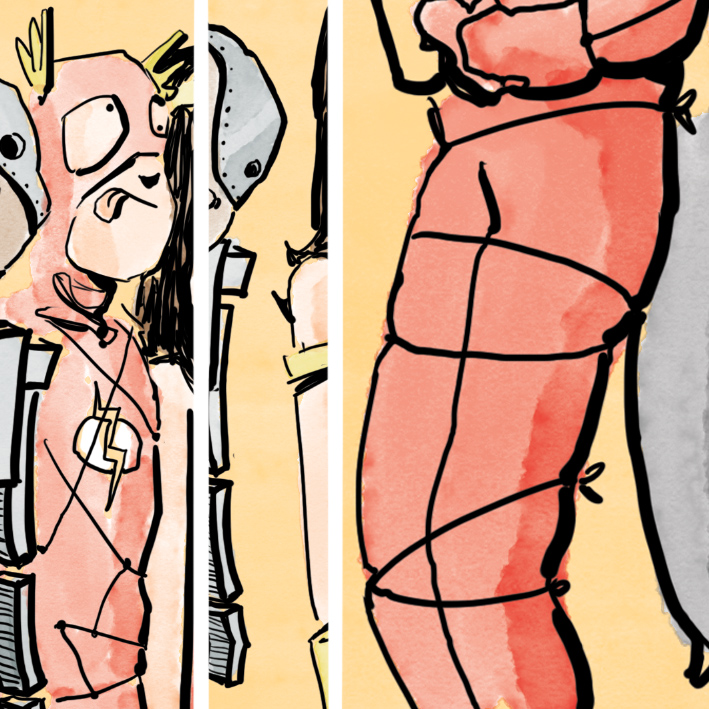 …is redoing her hair in the second panel.
This is a nod to something Grace Randolph from Movie Math pointed out, that is to say her hair in Justice League doesn’t look as nice as it does in the Wonder Woman movie. It might seem like a nitpick, but she used it as an example of the difference between Patty Jenkins and Zack Snyder and I actually think it’s a legit point (I highly recommend Grace’s YouTube channel for the latest (superhero) movie news by the way): 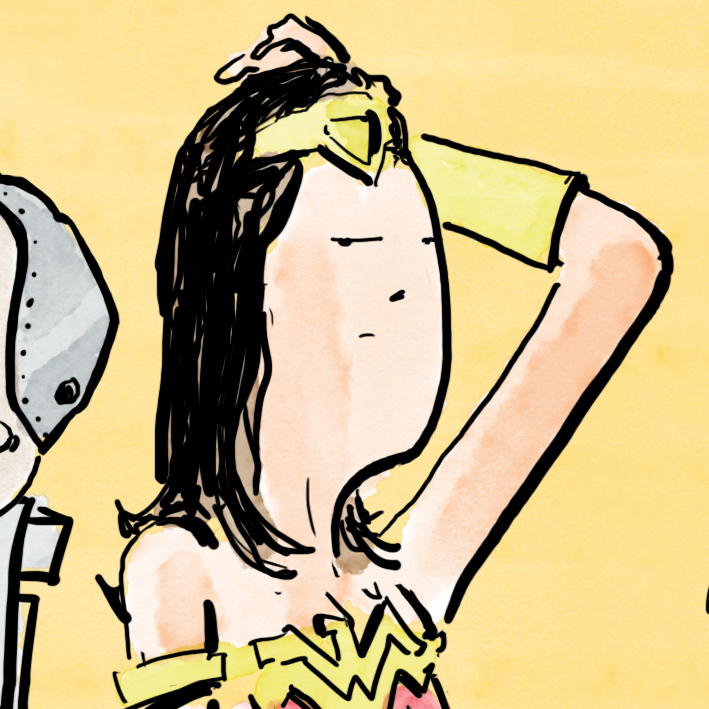 …I have to say, I am not a fan of Ben Afleck in the role, but I won’t go into that now. I incorporated the silly glasses from his so called ‘tactical suit’. And thought patching up his costume ‘hobo style’ would be a nice way to portray the battered look of the costume.

Oh and I gave him a Robin RIP mug in the final panel, just because I think the whole reference to a dead Robin in Batman v. Superman was fan service that didn’t service the story one bit (like, most of that film actually): 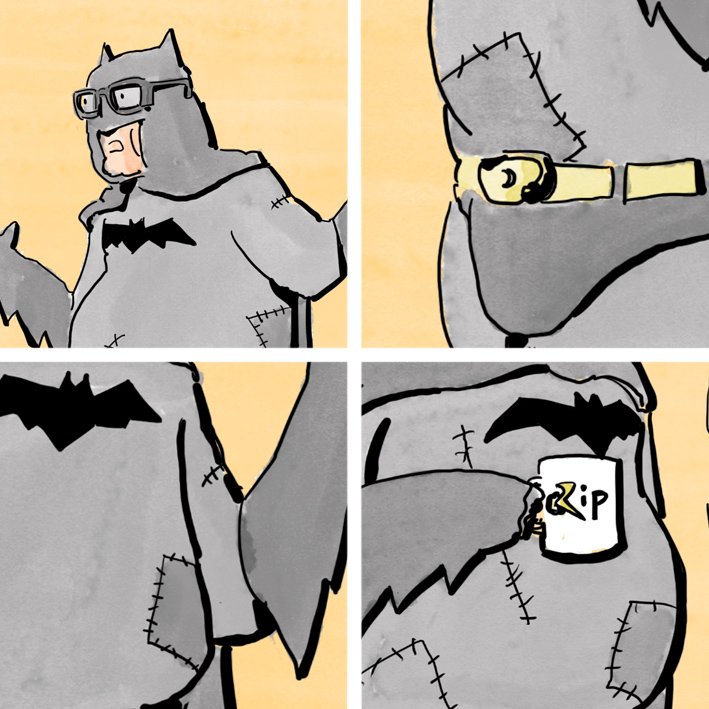 I noticed, while injecting these ‘background stories’ into the comic, how much fun it is to do.
But it also made me think about trying to use that in a more serious fashion.
I’ll see if I can work something out.

What do you think?

As always I’m curious to hear your thoughts!
Do you like my take on superhero’s in cartoon format?
And what do you think of these ‘background stories’?
Let me know in the comment section below!