This is a breakdown of my comic Imperfection.
If you haven’t read it yet, you can read it here.

Ever since I read Brené Browns book(s) about imperfection and vulnerability I wanted to do a comic that would explore some of that.
Brown actually make a very solid case about embracing your own imperfections and being more vulnerable in everyday life.
I think it’s a very important thing and the best thing is she backs it all up with scientific data and she talks about it in a really inspiring and – let’s be honest – hilarious manner.
Check out some of her stuff over at brenebrown.com

As an artist I find it really tough to not want stuff to be perfect.
I have an image in my head about how a drawing, character of page should look.
And if I don’t achieve a 100% likeness, my first reaction is that I must be a terrible artist.
Sending me of into a spiral of self-loathing and thinking I might as well not do anything at all anymore since I’m no good for anything (or something like that).
Which is something they call ‘self-handicapping’. 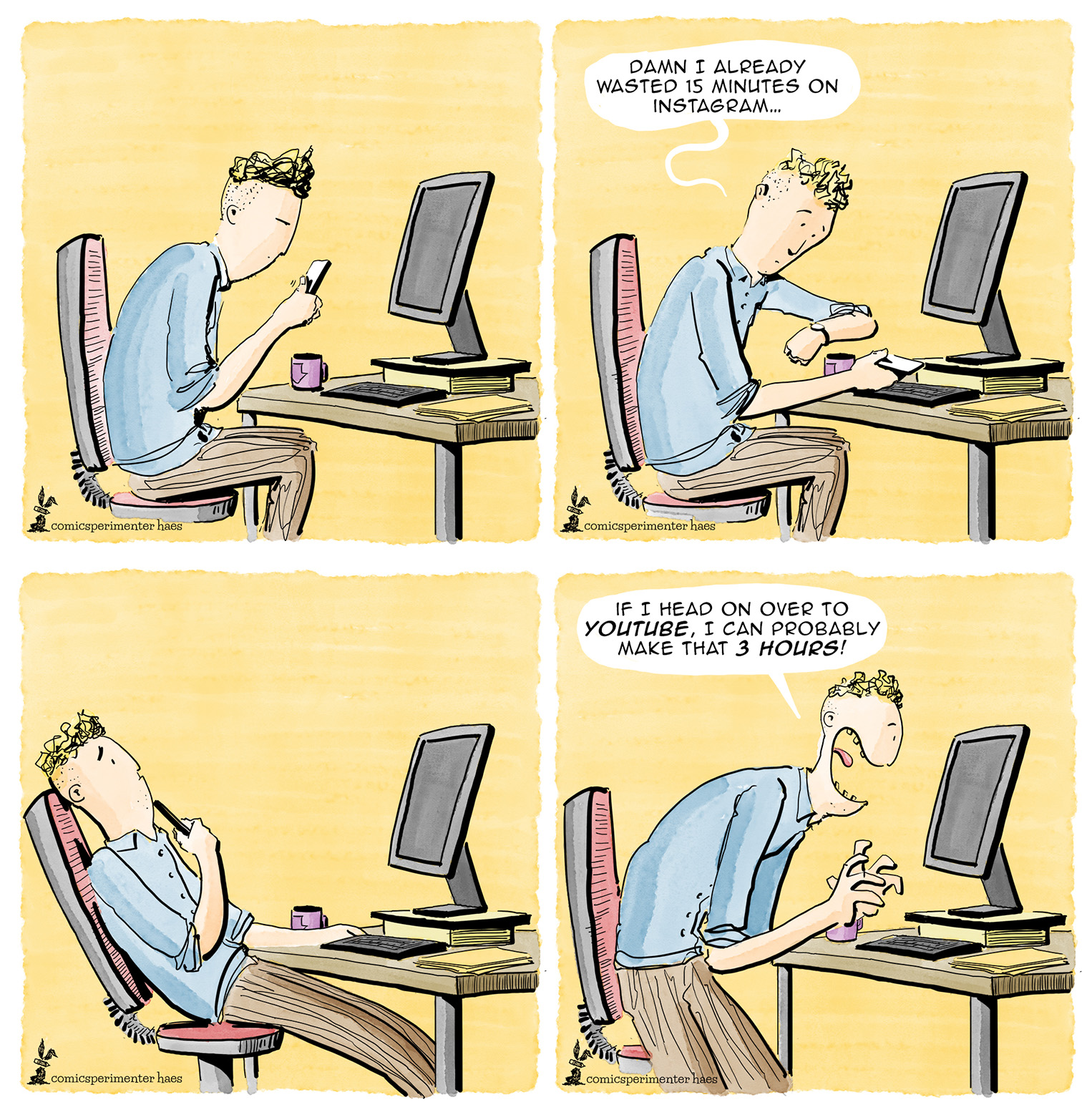 In my journey as a comic book artist I realized again and again that most of the time it’s better to do 80, 60, 40 or even 20% that to do nothing at all.
That means that you have to be able to live with the fact that you are not infallible.
That you’ll screw up.
That you’ll make mistakes.
It’s unavoidable.

The sooner you learn to live with that, the better.

So, considering all of the above, I thought it would be nice to ‘push myself into imperfection’.
That’s why I decided to…
…draw one of the characters in the comic with my left hand!

This is one of those ideas that popped up in my head and just wouldn’t leave.
And because I knew it would be one of those crazy moments, I thought I might as well film myself while trying.
You can watch the video of me drawing left-handed here below:

As you might be able to tell, I was excited and terrified at the same time by the thought of having to draw something which would be way beyond my control.
‘Terrified’ might sound a bit extreme, but that is really what it was.
What if I’m not able to draw the hands, nose, mouth the way I picture them?
What if it turns out bad?
What if people will laugh at me, ridicule me for the rest of my life and turn me into a social outcast?
All those questions ran through my head as soon as I picked up the pen.

But then something magical happened.
I was able to just look at the drawing as if it was someone else’s.
And appreciate it for what is was.
The wobbly lines.
The crazy hair.
The complete lack of anatomic accuracy.
Suddenly I noticed…it was perfect.

Once again I realized that making art, be it comic book art or anything else, works best if you show at least some of your own personality.
That’s never easy and uncomfortable at best.
But I found it’s the only way for it to be worthwhile. 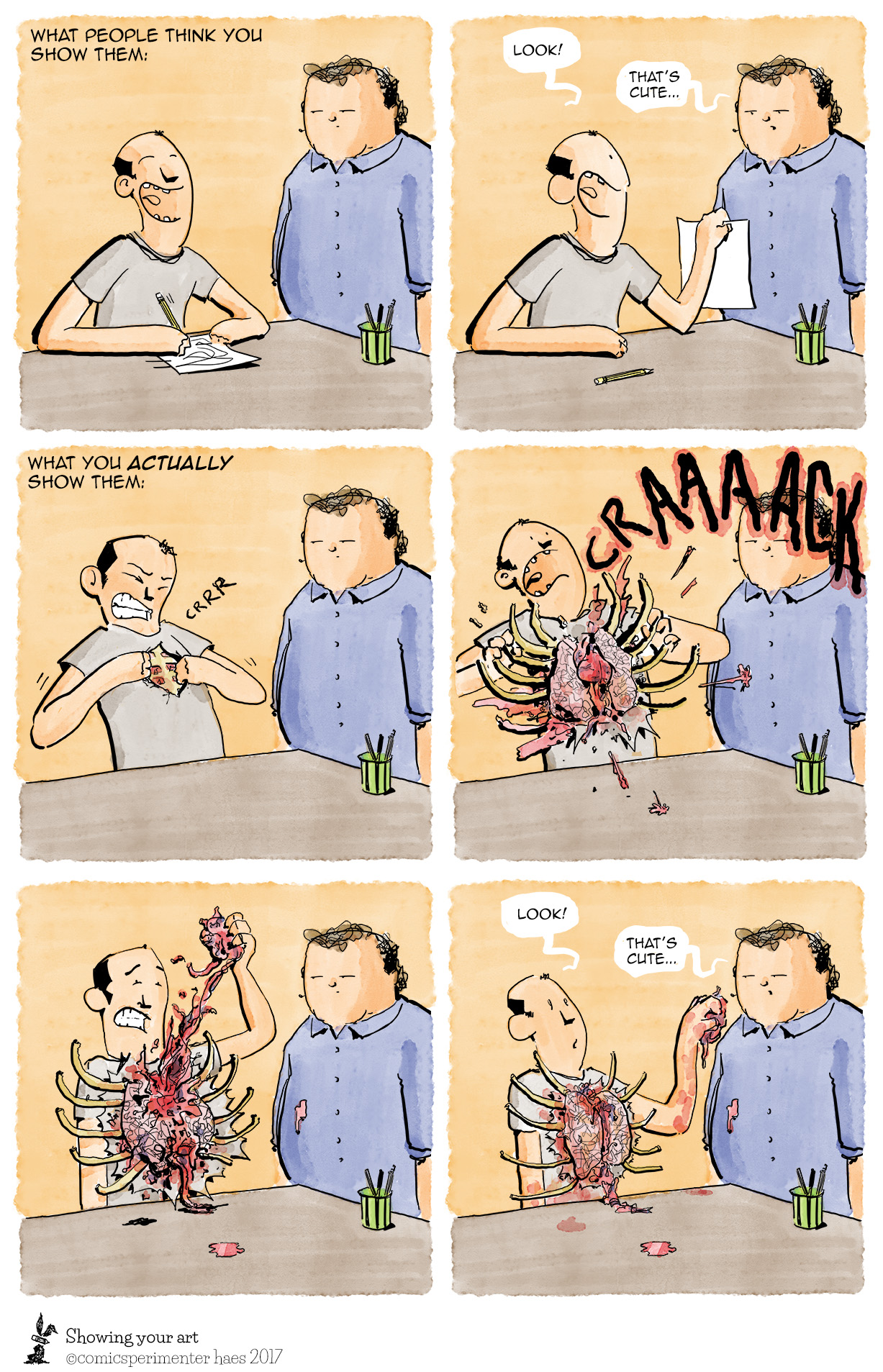 Sure, in the short run it’s great to make something that might please a lot of OTHER people.
But in the long run that just isn’t sustainable.
And you have to find something within yourself that is worth sharing with the world.
And eventually it might please some other people anyway.

Okay, that was quite a contemplative post, haha.
Well, sometimes they just are.
And I think it is a point worth making.

Did you ever consider showing more of yourself (eg. be more vulnerable) in your work?
How did that work out for you?
Do you think more comics should be like this?
Let me know in the comment section below!