For my latest comic, Going Out, I wanted to create a feeling of detachment.
Locations and objects telling a story instead of using characters acting it all out,
The main driver for this was actually one of Scott McClouds transitions.
Wait, what? Who?
Let me explain.

Famous comicoligist Scott McCloud wrote a lot about comics. And he did most of it in comic book format (!).
In his groundbreaking work ‘Understanding Comics’ (1993) he distinguishes six ways in which panels can transition.
The two most used are action-to-action and moment-to-moment transitions. 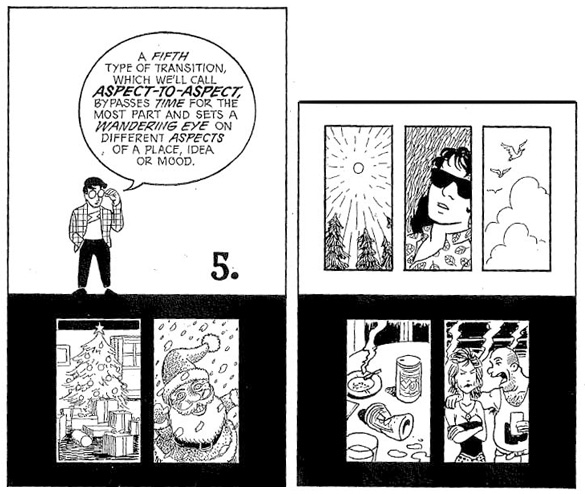 One of McClouds findings is that another transition aspect-to-aspect is far less used in western comics. In eastern comics tradition however, it is far more common.

McCloud goes as far as analyzing comics using bar charts and talks about the cultural origin of all this.
I highly recommend Understanding Comics it you haven’t read it yet.
But for now it’s enough to understand that he got me thinking about these aspect-to-aspect transitions. And I thought it would be a great experiment and exercise to try and make a comic with only aspect-to-aspect transitions.

IN SEARCH OF A STORY

Obviously I needed a story to go with this.
When looking for one, I took inspiration from Art Spiegelman’s short story ‘Don’t get around much anymore’.

It’s a one page comic he did back in 1973, before he made his famous Mouse comic, and consists of just one page. Spiegelman talked about the story as an experiment in which he “wanted to find out what could happen when noting happens”. It’s a great experiment and shows what a master Spiegelman is. You can read a bit more about Don’t get around much right here .
Actually, subconsciously, Going Out turned into a bit of a mirror image of ‘Don’t get around much anymore’ in a way.

Another inspiration was how old age influences ones perception.
Both my grandmother and grandfather experienced a form of dementia at the end of their lives.
Leading to scenarios as serious as them wanting to escape the nursing home they were in or as weird as them thinking people on TV were actually standing in their living room.
It’s such a sad disease and quite painful to see.

What I noticed is the thin line between severe dementia and ‘just being confused’.
Sure it is natural for grandma to forget a thing or two.
But when does it turn into alarming behavior?
It seems some of this confusion can be explained by isolation or the lack of any daytime structure a lot of elderly people experience.

That lack of structure and a wandering mind became the main influence for the story.

When I started writing Going Out, I began with the simple concept of showing how someone would be ‘going out’ of the house, by showing the interior of his/her home.
The final line popped into my head quite quickly:
Where the hell was I going again?
I wanted to emphasize that something as simple as leaving the apartment for some groceries can be a real struggle for some.

However, when working on the thumbnails and writing the captions for this, I realized it would be very important not to literally echo in text what we already see happening in the images.
This is an important part of comics for me, making sure the words actually add something to the pictures and vice versa. Instead of them just mimicking each other, avoiding silly images like this: 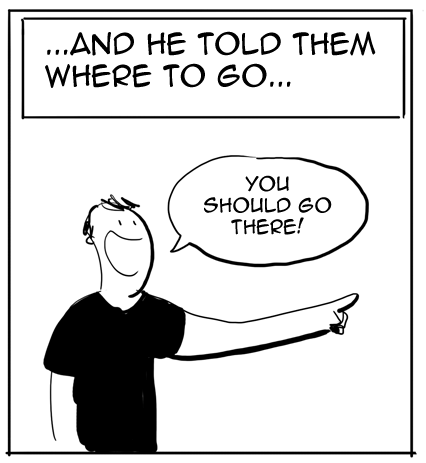 In looking for a way around that literal approach (eg. Showing an image of a table and writing ‘I left my keys on the table’), I reread ‘Don’t get around much anymore’.
Then I realized Spiegelmans brilliance wasn’t only in his aspect-to-aspect set up of the images (and use of cubism), but also in the way the captions worked.
In some of the images in that story the text actually describes the image in the PREVIOUS panel.

This is such a strong and weird narrative device, that really gets the reader in a disjointed state of mind. In other words, it was just what I was looking for.
(Actually, if you read the opening page of that superheroes-deconstructed-comic called Watchmen closely, you’ll see Alan Moore uses a similar trick.)

Obviously, there is no point in simply copying what Spiegelman already did in 1973 (!).
So I thought about a way to build on it.
That lead me to think it would be interesting if I could maybe tell the story backwards.
That should lead to some feelings of detachment, right?

To achieve this I started by dividing the panels into rows: 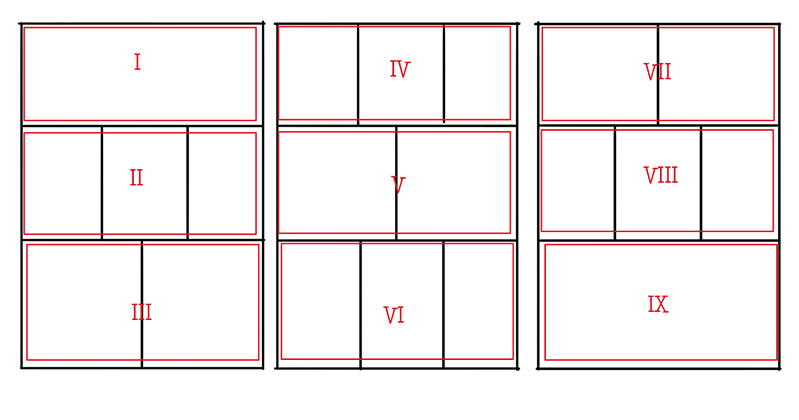 Then for each row, I would write a set of captions. 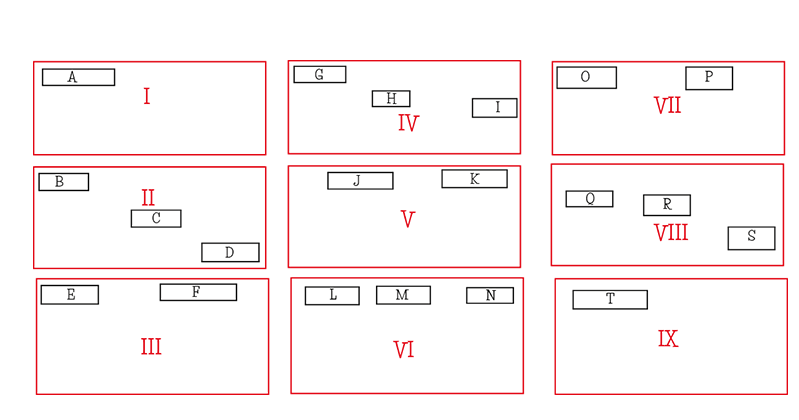 [groups have captions added to them]

And then I took each set of captions and rearranged them from back to front.
Leaving us with something like this: 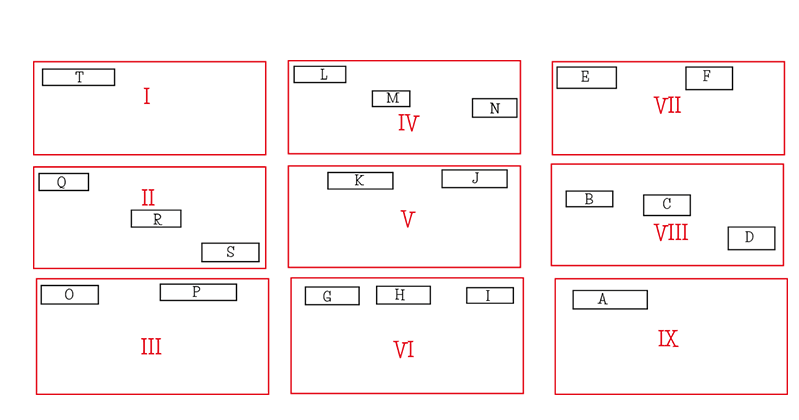 [the captions are reversed]

So now, for instance, the caption text for panel 2 is postponed up until panel 19. While we can already read the caption of panel 20, in the first panel of the story.
This leads – I think – to a weird echo effect for the reader.
Seeing an image one moment, reading about it further down the line. 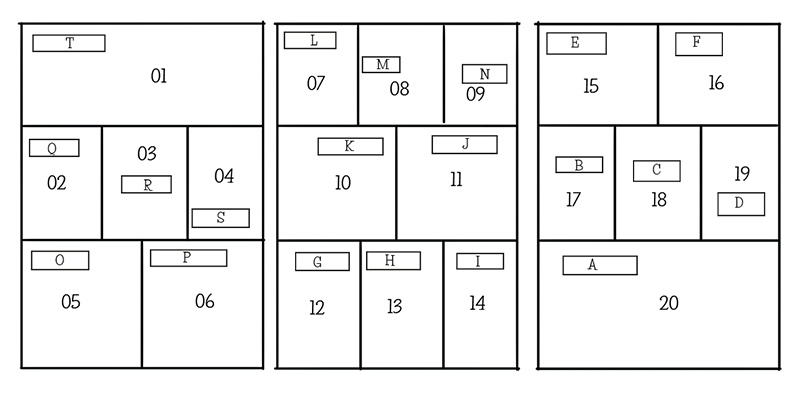 The images and text cross in the middle of the story (panel 10 and 11) and each go their separate ways from there.
This way each set of panels (2, 3 and 4) is linked to another set of panels (17, 18 and 19).
I think it’s interesting to think of panels in a clustered way like that.
Pairing them up reminds me a bit of a game of memory, which is of course quite fitting, considering the theme of the story.

It’s a bit of a puzzle, but I think the effect is worth it.

To give the reader a slight clue of what is going on, I decided to let color provide a little hint.
So I gave the corresponding panel-sets the same color scheme.
If we put that in a schematic, it would look a little something like this: 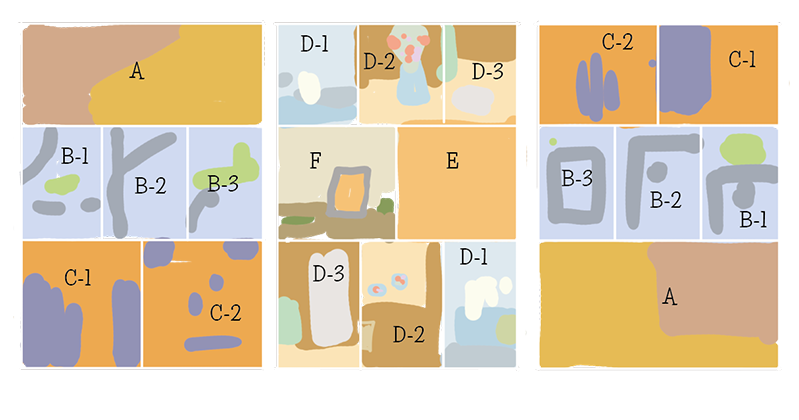 You can see the colors in panel 5 and 6 are the same as those in panel 15 and 16, strengthening the echo effect in the reader’s mind.

So, that’s a lot of puzzling, color hinting and panel-coupling for just a three page story, right?
Maybe.

But I believe a reader experiences some of all that, at least on a subconscious level.
And those who want to dive in deep, at least have the ability to do so.

Beyond the crazy memory puzzle challenge the story element of this short comic provided it also was quite the drawing challenge.
Usually stuff like tables, beds, showers and hallways are just backgrounds.
This means you can cheat a little here and there.
But when these things become the main object of a story, you have to be able to draw them convincingly.

That took some time.
And was a bit of a struggle now and then.
But it was also very fulfilling after the job was done.
Just like my dog-drawing experience for Abandon, it was a great way to develop some of my drawing abilities I otherwise wouldn’t have.

WHAT DID YOU THINK?

Do you think it was a successful comicsperiment?
Did this breakdown deepen your experience of the story?
Or did it get in the way a little bit?
Any other questions?
Let me know in the comment section below!

2 Replies to “Going out breakdown”