Art of the wordballoon – II

Art of the wordballoon – part II

DIALOGUE AND TIMING IN COMICS

In Art of the word balloon – part one, I spoke about the importance of word balloons and what you as a reader can demand from them.
Today I want to talk about the shift word balloons made from a ‘desperation device’ to an integral part of comics.

One of the most significant qualities of word balloons in comics, is the way in which they can be used to play out an entire dialogue within one single frame.
Scott McCloud provides us with a fine example of this in his Understanding Comics.

Here we see the total of seven characters speaking.
But obviously not all characters speak at the same time. The reader takes in the dialogue one word balloon at a time.

The way the balloons are placed also dictate the timing of the frame.
By spreading out dialogue, or compressing it, the writer can influence the speed with which the reader sees the story unfold.
Compare, for instance, these two dialogues:

Same words, but the scene plays out quite differently.
In the first example the guy on the right seems to babble on nearly without any pause. While in the second example there seems to be quite a pause in between every sentence. Like maybe the character is making them up right on the spot.

A similar point about timing and word balloons is made by Robert C. Harvey. Using the example below he writes: 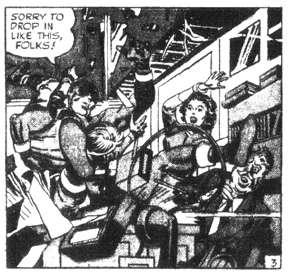 “Fighting American’s flip remark in the last panel is an interesting study in impossibilities. When does he speak? The conventions of the medium allow three possibilities – each an instant apart: just before he lands, as he lands, or just after. Inn any of those circumstances, the sound of falling glass and timber would, in film and real life, drown out his words. But not in the comics. In the comics, words and pictures can be coupled to reveal the hero’s cheery bravado even in the very midst of thundering action, collapsing buildings or stampeding elephants.”

So, the way dialogue is used in comics differs significantly from the way it is used in movies and books. And it is a unique part of comic storytelling.

That means, that as a reader you should be on the lookout for specific signals and hints.
More on that in the third and final part of the art of word balloons.

De difference between comics, film and literature becomes crystal clear when a story from the one medium gets adapted to the other.
Obviously there have been a number of comic book movies. But also adaptations from books to comics (City of Glass, anyone?)

Which comic book adaptation did you think really stood out?
And which not so much?
Let me know in the comments section below!

Did you enjoy this article about wordballoons?
Read part III right here!