In my latest comic two guys run into each other at the coffee machine.
Their talk seems innocent and benign, but is it?
Read Argument below: 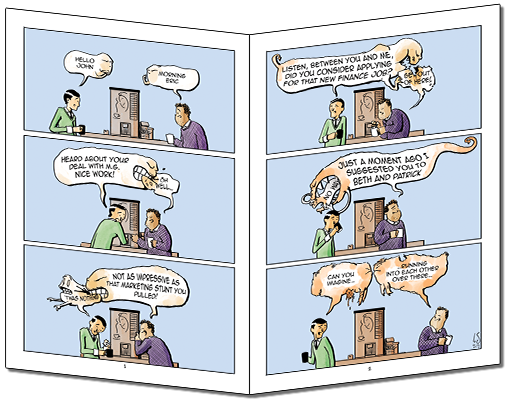 Sound familiar:
You overhear two people talking, they give each other compliments, but you can’t stop thinking something’s off.

If you’d write down the exact dialogue, everything would seem fine. But still, because of the way things are said the underlying envy is quite clear.
Especially at work, where actual physical aggression isn’t very suited (though it would be quite refreshing every now and again), entire battles are fought beneath the surface of conversation.

If you’ve been reading my previous comic, or some of my articles, you know by now that I am quite intrigued by word balloons. It’s one of the things that make comics unique and I believe they offer great possibilities from a storytelling perspective.

In Argument I wanted to make word balloons tell an important part of the story.
What if we could actually see the underlying meaning of spoken words?
What does actually happen when two people talk with each other like that?
I think the answer would be: massacre!
That’s why I drew two very plain guys at a coffee machine.
Very relaxed, as you see people all the time.
And if we were to take their dialogue at face value, not much would seem to be going on.
But were we to look at the word balloons, we see these are literally trying to kill each other.
So much for compliments!

Though I do think this doesn’t only hold for compliments.
A lot of remarks can come across quite blunt (believe me, I know).
I think a scene like this helps to lay bare how absurd, but also cruel our conversations can be sometimes.

Comics are a hybrid form, words and pictures working together to tell a story none of the two could tell on its own.
I build on that in Argument by making the words tell a contrasting story to what we see in the images.
That way, the reader is challenged to actively piece the story together.

Actually I made this comic in Dutch about a year ago.
It was back when I still made most of my stuff in black and white.
For some reason I was too lazy to even ink this one, so I just made a pencil-version of it.
Looking back at it, it always struck me as quite unfinished.

And to effectively get a story across I think the art should not distract the reader (unless you want it to).
So I must say I am quite happy that I finally found the time to ink this and give it some color.
Looks a lot better, don’t you think?

In this comic we focus on compliments.
But obviously there are more examples of seemingly harmless remarks or conversations.
Do you have any examples?
Please let me know in the comment section below!